When I wrote the last post, the first reports of Newtown were just starting to trickle in. I spent the remainder of the day like so many, staring blankly at my screen, the need to squeeze my daughter growing stronger and stronger. On the way home, all the energy used to keep it together during the day vanished, and I sobbed the entire drive. I was wracked with relief over being able to go home to my baby and overcome with guilt that I was able to and so many parents were not. I avoided the TV all weekend, and when an email from the principal at Emma's school asked parents to please talk with their children about what had happened, I shut down. Nope, not going to do it.

But we did. On Sunday night we sat her down and told her, in the most general terms we could manage, what had happened. We assured her she was safe, which felt like a hollow promise. How can guarantee anything? But we promised. And we told her we would talk to her about anything she wanted, and answer any questions she may have. She was solemn and asked only if they caught the person who did these terrible things. Yes, we said. He won't hurt anyone else anymore. As I walked her to room at bedtime, she told me she would have rather not known about what happened, confirming my feeling about not wanting to tell her. And that night she asked to sleep with me.

Posted by carolyn at 12:56 PM No comments: Links to this post

Honestly, someone should have started a pool on how long it would be until I posted again. One of you would be... not rich. But maybe have a couple of extra dollars in your pocket.

So I'm sitting here in the midst of what I like to call existential crisis mode, where I can't focus on anything and I fleetingly think about all the things I should be doing, and then, like a boulder dropped onto my chest, I am missing my kid something awful. It's fierce and piercing and it physically hurts. I'm not sure if it's because of the child who was just carried out of the library, crying. Or seeing the headlines about the Connecticut school shooting. Or just because sometimes, despite the frustration and the backtalking and the seemingly constant sass, I miss my kid.

I've taken no pictures. I've written no blog posts. I've made no phone calls and I've addressed no Christmas cards.

Posted by carolyn at 11:27 AM No comments: Links to this post

I wrote this Saturday. With all the best intentions. Let's try again.

I've done this before, not always successfully. But I'm once again feeling the urge to attempt something AND complete it. That urge is a dangerous one and usually results in tears and/or drinking. But fresh starts and all that.

So we begin. A post a day for the month of December. I also want to do the monthly photo-a-day challenge, so I'll try to include that picture with the post.

Do you want to join me with a challenge of your own? Share it in the comments and we'll be each other's motivation.

My plan is to catch up by this weekend. I have the photos. I have the posts. I just have to put them together.
Posted by carolyn at 11:17 AM 1 comment: Links to this post 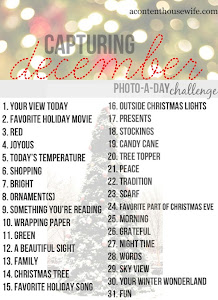